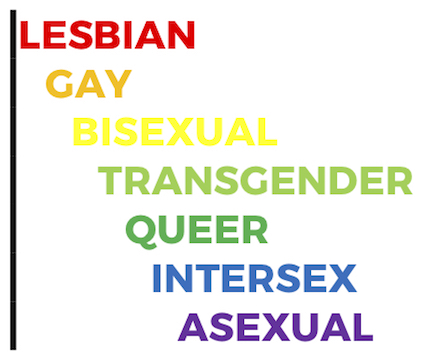 In celebration of JUNE LGBTQIA pride month alot have changed from previous years. Closeted gay already have courage to show off to the crowd how a gay person is – Happy and Gay. LGBTQIA society have evolved in many aspect, such as in accepting their own imagery and boosts their confidence to show to the society that we live with equal rights and privileges and that being gay is fun and exciting.

1. Lesbian – A woman whose primary sexual and affectional orientation is toward people of the same gender.

– This gal has the heart of a woman with a strength and firmness of a man. They rule the relationship in good perspective.

2. Gay – A sexual and affectional orientation toward people of the same gender.

– They don’t look for color, race and gender in love. They perceived LOVE as no face. If they loved, they gave it all even if they’re left with nothing.

3. Bisexual – A person whose primary sexual and affectional orientation is toward people of the same and other genders, regardless of their preference.

– They’ve got the best of both worlds. Pleasure and intimacy is their primary focus. They are more experimental and willing to go beyond your expectation. Most Bisexual’s are libra.

4. Transsexual – A person who lives full-time in a gender different than their assigned birth sex and gender.

– They are fragile. Treat them with kindness and respect. They are very brave and willing to take the risk. They have lost their family and some friends because of their choice of happiness. A diamond coated in Bronze – Precious but malleable.

5. Queer – One definition of queer is abnormal or strange.

– Living a GAY life is a challenge itself. Not everyone will accept you for who you are and for what you have become.

Being STRANGE is a character which coward people defy, whislt being ABNORMAL takes some courage to prove judgemental minds.

6. Intersex – People who naturally do not fit neatly into society’s definitions of male or female (Hermaphrodite).

– In presence of having both sex in one body is hard to accept that it exists. If you think that your sex life is a mess, think of this! Be grateful for whatever pleasure you get and be an instrument of ACCEPTANCE and NO JUDGEMENT.

7. Asexual – A sexual orientation generally characterized by not feeling sexual attraction or a desire to have sex.

– Who doesn’t like sex? Ofcourse NOT ME! lol but kidding aside. Not everyone have the pleasure doing it. If you’re one of those ASEXUAL type, at-least your safe from HIV/AIDS.